THE founding of Ashihara Karate in Singapore is attributed to one man- Vincent Shi.

He was instructed by the late founder of the martial art himself, Ashihara Hideyuki, and was ultimately qualified as a yondan (forth degree black belt) by Ashihara Karate's global governing body- New International Karate Organization (NIKO).

Today, Vincent stands among a handful of instructors internationally holding a yondan, a high grade in Ashihara Karate according to NIKO.
Comic Book Legends - Origins
Vincent started learning martial arts when he was nine years old. He picked up Hong Quan - a Shaolin style of Kung Fu- before taking up Kyokushin Karate in 1971, after a childhood friend persuaded him to learn the martial art together.

“Actually, I wanted to take up Tae Kwon Do,” Vincent says. “But my friend influenced me to train in karate to accompany him. From then on, it was karate all the way for me.”
In Hiroshima, Vincent was impressed by the trademarks of Ashihara Karate- its use of positioning and footwork, and emphasis on realistic sparring techniques.

“What made me very impressed was how the kata and combinations were very different from traditional karate,” says Vincent. “Traditional karate is all about one-step movements, step by step. But the Ashihara kata that I saw emphasized free movement and ideas for kumite (sparring). So the techniques are more for fighting, more practical.”

“It was quite a small dojo,” he recalls of his visit in Hiroshima. “But they had quite a number of members.”

When he returned to Singapore, Vincent decided it was time for a change. He wrote to Ashihara Hideyuki, the Kancho (organization chief) of Ashihara Kaikan at the time, and formally asked to join this “Vagabond’s” school of karate. He was holding a sandan (third degree black belt) under the Kyokushin organization when he left to join Ashihara Kaikan.

“Relax more!” - Ashihara-Style Training
There was no Ashihara dojo in Singapore when Vincent joined the organization in 1983. So, Ashihara Hideyuki-kancho asked one of his students who was based in Singapore, Matsumoto, to get in touch with him.

Matsumoto invited Vincent to train with him and his son in their apartment.  After that, Vincent visited the Ashihara Kaikan headquarters in Matsuyama, Japan, where he studied under the founder himself. 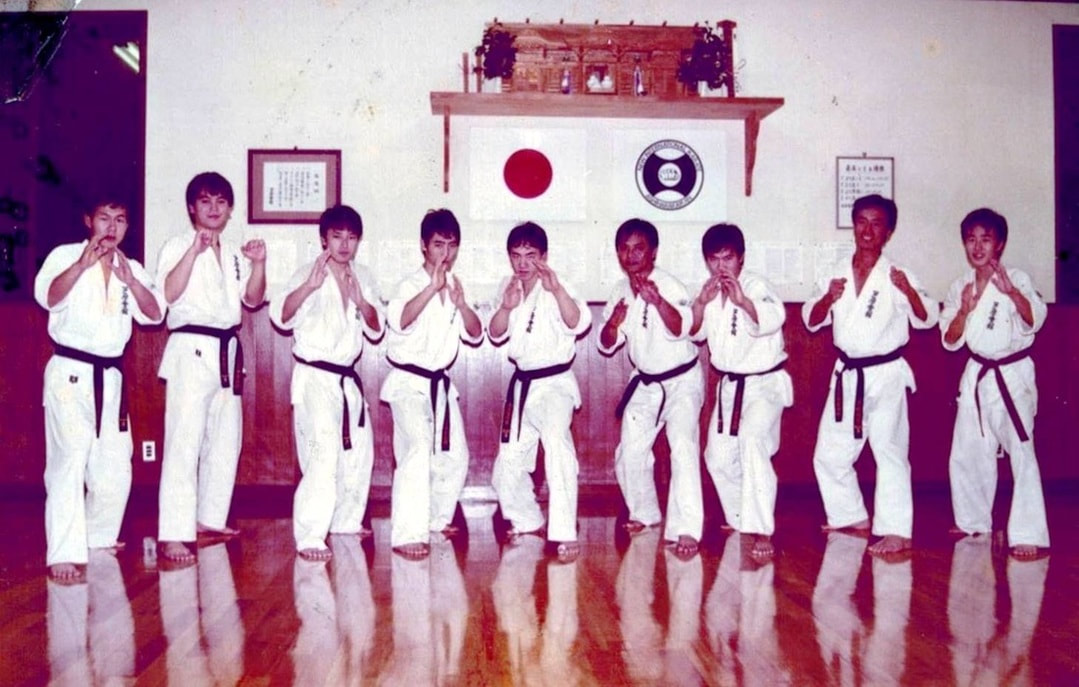 Above: Vincent training in Ashihara Hombu (Oct 1986)
Vincent remembers fondly the “culture shock” he experienced when the late Kancho took him under his wing.

“I was very rigid at the time - very hard,” Vincent says. “So Kancho kept telling everybody to relax, take care of your opponent. He told us to try to cut down on injuries during practice. He was very caring.”
The founder of Ashihara also had a teaching style that was very different from what Vincent was used to in his former karate school.

“In the past, the instructors I faced did a lot of shouting. But the way Kancho talks sometimes, his commands are like singing. He’s not so rough, and he’s very concerned about safety and techniques.”

Vincent adds, “Safety means he doesn't want us to spar very hard. We must make sure we relax, hit on target and use proper movement. Don’t waste our energy during sparring. This is the same thing we’re teaching now.”
Vincent started out with slightly more than 20 students then, half of whom were new to karate. A second dojo was later set up in Safra Bukit Merah. At its peak, Ashihara Kaikan Singapore had 12 dojos around the country. It was also involved in sports karate.

“Some of the members wanted to try out sports karate, so I let them. They had good results too,” says Vincent.
To draw more students, Vincent believes Ashihara Kaikan must focus on its strong points- the emphasis on safety and logic.

As for current students, Vincent has this to say, “Be more observant. Observe what the instructor does and try to follow. After that, think- why is the technique taught like this, how do you apply it? Finally, think about how you can improve the technique.”
Content composed by Cheryl Ong, member of Lionheart Academy